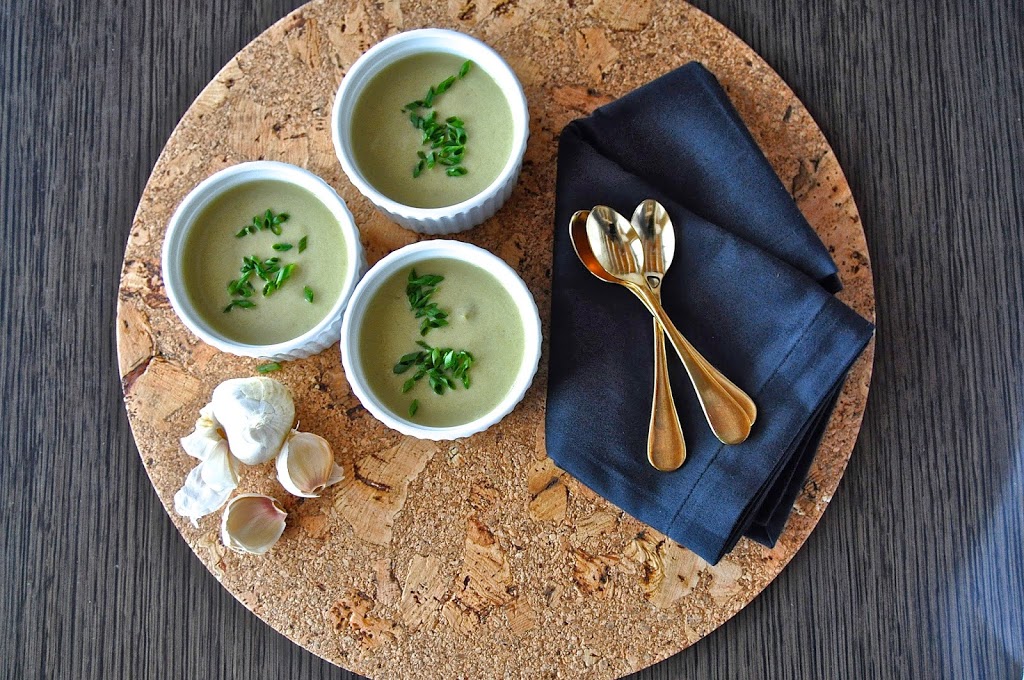 While Mr. Giggles and I have been trying to recover from whatever illness took over our house, I have been getting back into soup making. Usually when this time of the year rolls around I am ready for only fresh things, reminding me of the warm weather to (hopefully come). And I am more than willing to boycott anything in warm liquid form. Stews go out the window, soups are shoved off and anything braised? Pfff.

Except when we are both sick. Both sick with the chills, runny noses and that kind of feeling where you just want to be curled up under a blanket (or six) sleeping away the yucky feeling. So between all the green smoothies and ginger shots, after the echinacea drops and the sambucus syrup I have been making soups to make us at least feel like we are still eating well. Just because we are sick doesn’t mean we can’t still eat a delicious meal, right?

Enter garlic soup. We were recently in New York and I had a lovely garlic soup with chia seeds, farm egg and smoked chili oil. It was so comforting and scrumptious that I knew I had to make a “Giggles version” at home. And the best part? It’s an unbelievable easy recipe that by nature is vegan. You can sass it up with a little cream if you would like, but it really doesn’t need it baby cakes! It’s delicious on it’s own right. The real trick is making sure you are using good stock or bouillon. I used Massel bouillon (I was recently introduced to it by my friend, Tess Masters aka The Blender Girl and I am ADDICTED! It’s vegan, gluten free, dairy free and so rich you wouldn’t even believe it!).

Whether you are sick or not, this satisfying soup will be sure to become part of your repertoire. It’s simplicity, ease and bone sticking richness will have you falling in love with it… 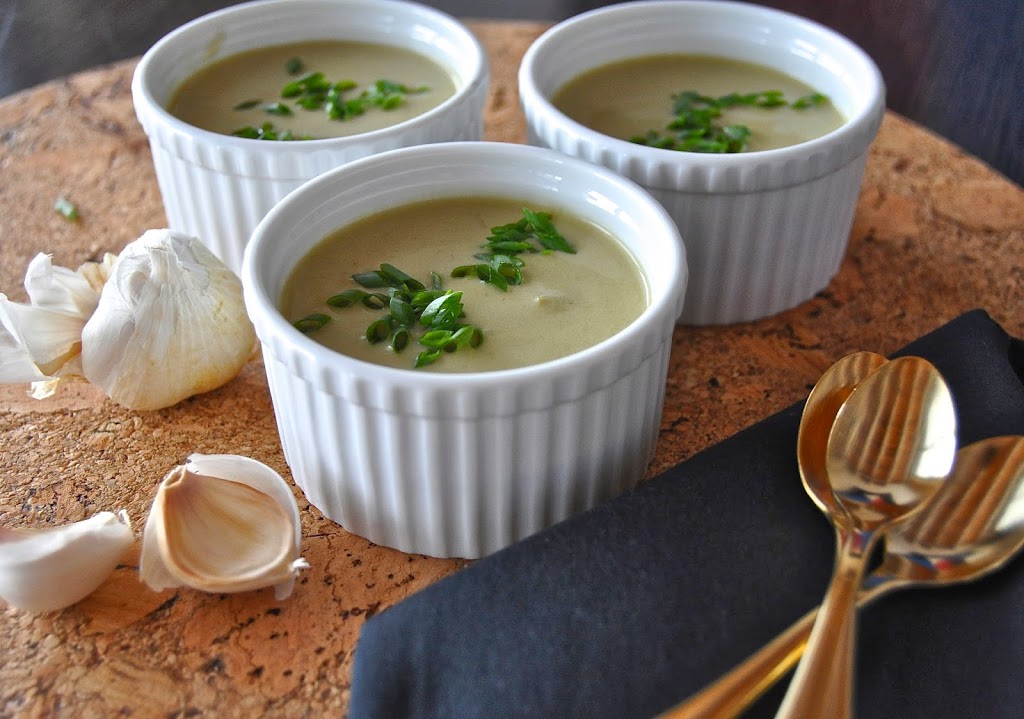 Garlic Soup with Sunchokes and Chive
Vegan, Gluten Free, Dairy Free, Egg Free, Soy Free
Serves 5-6 as a meal
·      20 whole cloves garlic, peeled
·      2 medium leeks
·      1 pound yellow butter potatoes
·      6 cups water*
·      3 Massel “chicken” bouillon cubes*
·      ½ pound sunchokes (also known as Jerusalem Artichokes)
·      ½ c. minced chive
·      optional drizzle ins- ¼ c. harissa cashew cream (vegan), ¼ c. heavy cream (not so much vegan), 2 T. chili oil to drizzle over top
DIRECTIONS
1.     Split your leeks and rinse them thoroughly under water to remove any sand and dirt that collected between layers. Pat dry and roughly chop.
2.     Dice the potatoes and set aside.
3.     Preheat large dutch oven, such as a Le Creuset, over medium heat. Add a hearty swirl of olive oil and pop in the garlic cloves and chopped leeks. Saute for 5-6 minutes until the leeks have softened and the mixture is fragrant. Add the diced potatoes, stir to combine and then pour the water over the top and add the 3 bouillon cubes.  Bring to a boil then turn down to low, cover and simmer for 25-30 minutes until potatoes are completely softened.
4.     While the soup is cooking prepare the sunchokes by scrubbing them thoroughly. Slice off any soft or darkly colored spots. Slice the remaining nubs thinly and set aside.
5.     When soup is ready, puree with a handheld immersion blender or use a highspeed blender, mixing until completely smooth. Pour back into the same pot you cooked it in and add the sliced sunchokes. Simmer for another 15 minutes until sunchokes are tender. Taste for seasoning and adjust with salt and pepper as needed.
6.     Ladle into bowls and add in any optional “drizzle ins” that you would like, finishing with a sprinkle of the minced chive.
*In lieu of the 6 c. water and 3 bouillon cubes you may also use 6 cups of your favorite prepared stock.
Happy, Healthy Eating! ~Kendra 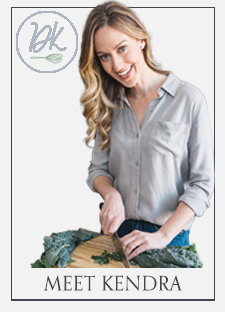